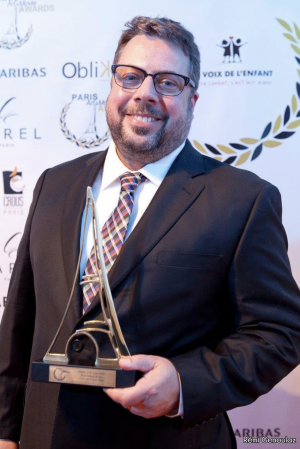 Graf’s first screenplay, WINTER OF FROZEN DREAMS, produced for the Lifetime Network, starred Thora Birch and Dean Winters, and won top honors at the IFP Market in NYC. Michael’s also a working member of the Director’s Guild of America and lives on a small Wisconsin farm with his artist wife Linda Massey, a miniature horse, and three Jack Russell terriers.

During the residency Michael will be researching and writing a screenplay about the effects of global climate change. The dramatic story is set some ten to fifteen years after the collapse of Antarctic glaciers and the melt off of the Greenland Ice Shelf.

He envisions “lab shadowing” researchers and scientists working on climate change, meteorology and dendrology/arboriculture with the goal of incorporating factually correct science, accurate scientific terminology, and translating the most current and cutting edge theories and understanding of climate change into the easy to understand vernacular of pop culture.

The screenplay will also challenge gender stereotypes in science and filmed entertainment genres.