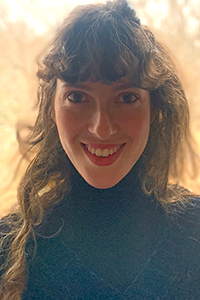 Kayla Cohen is a quasi-nomadic writer and environmental researcher. She grew up in London and New York City and has lived in ten cities across six countries during her twenties (including Madison, San Francisco and San Diego in the US). In her spare time, she reads, runs, wrongly identifies birds and tries to convince her friends to come visit.

Kayla is a writer who is awed by science, concerned about pressing environmental and social equality issues and who attempts to combine these interests in her fiction. Signed by the New York based Levine Greenberg Rostan Literary Agency, Kayla is Writer-in-Residence at the Wisconsin Institute for Discovery where she will be writing her first book as well as interviewing and shadowing scientists. Their work will inspire parts of her mystery novel’s plot and characters.

Kayla first joined WID in 2019 when she worked with Dr. Jo Handelsman on “A World Without Soil”. The book aims to raise awareness around the severity of soil erosion in the U.S. and around the world. Her role included interviewing, editing, making creative contributions and providing research on soil erosion and the socio-economic elements of land degradation issues. A World Without Soil has been reviewed in Nature, Science, and the New York Review of Books. It recently won the PROSE prize for scholarly excellence in the field of Government & Politics, granted by the Association of American Publishers.

Kayla has a masters in Environment and Development from the London School of Economics and a liberal arts degree from Minerva University, winning the Best Overall Performance Prize and jointly awarded the Best Dissertation Prize at LSE. She has been published in the Sunday Times and The Independent newspapers.